Royal Salute 21 Year Old is the original reference and the anchor of the range. Handcrafted over six days by master porcelain makers, each ceramic flagon of Royal Salute 21 Year Old is crafted in red, green or blue to mirror the jewels in the Queen’s crown, and adorned with the majestic image of Robert The Bruce, Scotland’s hero-warrior king. It is then cloaked in an elegant velvet pouch, ensuring that it evokes a powerful statement, whether or not it is unveiled. 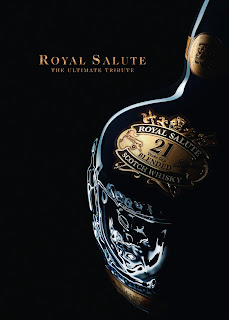 In 1953, Chivas Brothers celebrated the coronation of Her Majesty Queen Elizabeth II by creating a limited edition of a very special blended whisky. Only 2,500 cases were produced for worldwide distribution, and the first flagon, adorned with the royal crest, was presented to the new Queen on the day of her coronation. The name chosen was considered a fitting tribute to the new monarch. It was called Royal Salute, after the 21-gun salute, the ultimate mark of respect, created by the Royal Navy, to pay tribute to dignitaries and nations alike.


Today, Royal Salute continues to pay homage to accomplishment, in all walks of life. It is the Ultimate Tribute and mark of respect for powerful men and women, who demand the very best.
Posted by Luxury and Super Premium whiskies at 2:12 AM