Aberlour lies at the heart of Speyside and its distillery was first noted in 1826, although whisky was almost certainly made on the site before this time, drawing water from St Drostan’s well. St Drostan (or Dunstan) was made Archbishop of Canterbury in AD 960.

The distillery was rebuilt after a fire in 1898. Much of the existing building dates from this time, with extensions in 1945 and more recent modernisations by Pernod Ricard (Campbell Distillers), which acquired it in 1974. 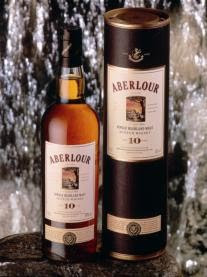 Aberlour Distillery uses only Scottish barley and has uniquely broad-based stills: the product is matured partly in sherry casks, partly in bourbon casks. Cork bungs are used instead of wooden ones; these, it is believed, allows the harsher spirits vapours to evaporate more easily.
Aberlour is the leading malt whisky in France - the world’s number one Scotch malt market – and its multi-faceted and distinctive single malt whiskies have proved a consistent favourite with international awards panels. Aberlour ranks in the top 7 largest selling Single Malt Scotch whisky in the world. It is the only Single Malt Scotch whisky to have won both the Pot Still Trophy (3 times) and the International Wine and Spirits competition (more than 10 times). Strangely, the week the first award was announced, St Drostan’s Well, which had dried up, gushed forth once more.
Tasting Notes
Colour: Gold.
Nose: The dry, fresh, fruity aromas of early autumn apples and pears are subtly enhanced with sweet notes of vanilla and mint toffee
Taste: Exceptionally smooth and creamy, with spicy-sweet nutmeg and honey combining with the dewy freshness of autumn fruits.
Finish: Long, soft and warming.
Tasting notes extracted from the whisky critic Charles MacLean notes: Aberlour possesses a rich nose, with a strong caramel aroma when nosed straight (it is delicious drunk neat), with traces of pine (fresh sawdust) and smoke, and a hint of peat as in a mountain burn. It has voluptuous body, and a typical Speyside flavour: sweet, estery, bubblegum and pear-drops. Well balanced, with a clean, sweetish finish. 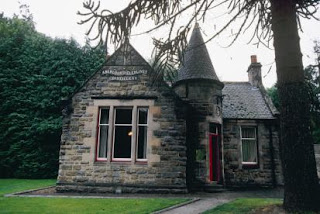 What the critics say about Aberlour:
"Lovers of the richer style of Speyside malt rightly regard Aberlour as being in the top echelon." Michael Jackson, Malt Whisky Companion
"A first rate Speyside single malt . . . a beefy 10 year old . . . with a multi-layered complexity . . for admirers of neater, thicker expressions." - F Paul Pacult, editor of Spirit Journal
"A smooth, rich, sherried Speyside malt which is an ideal after-dinner drink."- Carol P Shaw, Classic Malts
"This whisky has a voluptuous body, and a typical Speyside sweet, estery, bubblegum and pear-drops flavour that is well-balanced with a clean, sweetish finish." - Charles Maclean, Malt Whisky
"Aberlour is a beautiful amber single malt." - Helen Arthur, The Single Malt Whisky Companion "Few distilleries in the world fill me with such a plethora of warm memories and experiences as Aberlour. Inside and outside the glass." - James Murray, whisky writer and broadcaster.
"I am a huge fan of Aberlour 10 year old single malt. Aberlour is a consistent gold medal winner at all internationally recognised competitions. In my opinion, it is THE finist 10 year old Single Malt whisky that is often better than many single malt whiskies of superior age." - Mark Backhouse 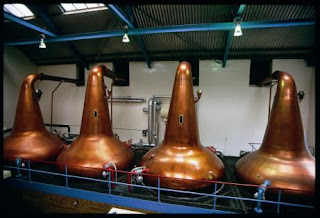 To produce a whisky as consistently good as Aberlour Single Malt, year after year, requires experience, craftsmanship, patience and dedication. The whisky-makers at the Aberlour Distillery have them all.

Visit http://www.aberlour.com/ for further information on this great single malt.


Posted by Luxury and Super Premium whiskies at 3:50 AM