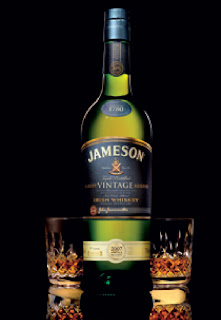 There is something hugely exciting about the creation of this Jameson Rarest Vintage Reserve and the 2007 Vintage will be greeted by connoisseurs with great anticipation, as it is all that is excellent in Jameson Whiskey… This initial expression of maturing rare pot still whiskey in traditional fortified wine casks is a triumph of the collaboration between the 4 Jameson Masters, whose artistry and craftsmanship have been richly rewarded. All the whiskeys in this magnificent Reserve are of an advanced age and have an immense collage of flavours to impart from their time in the wood. It is here that something extraordinary has taken place.
The pick of our older grain whiskeys were brought together with some rare and charismatic pot still whiskeys that had been matured in hand picked second fill bourbon casks. These were carefully married with a rare pot still whiskey that was aged to a fantastic mellow sweetness in specially commissioned port pipes… The resulting union has a glorious fruit rich character.
The question remains; is it art?... Its sculpted bottle, tapering neck and dark amber hue are undeniably beautiful, but it’s the treasure trove of complex tastes and its fruit and spice encore that should be savoured with friends to fully appreciate its inestimable inner beauty.
At 46% vol, the only concern is whether this Rarest Vintage Reserve will have enough of its limited stocks to last out the time before the eagerly anticipated next vintage is ushered in.
Since its release in 2007, Jameson Rarest Vintage could not have been more highly revered, receiving numerous prestigious international accolades, including being acclaimed Irish Whiskey of the Year in Jim Murray’s 2009 Whisky Bible, as well as at the 2008 Malt Advocate Whiskey Awards in New York. Jameson Rarest Vintage Reserve’s Gold Medal at the recent San Francisco World Spirits Competition follows on from its Double Gold and ‘Top Irish Whiskey Award’ at the 2008 San Francisco World Spirits Competition.
Posted by Luxury and Super Premium whiskies at 12:28 AM